Happy Birthday To Us!

Welcome to the Drop of the Pops!

But it made us think: what exactly have we been up to these past four years?

We had a quick look through the fridge and it turned out that in the last four years, Big Drop has developed, produced, packaged and released 17 beers. As well as won about 30 international beer awards.

Just saying, Diageo, just saying … patience is a virtue and good things do come to those who wait. But four years … ?!

So, for a bit of fun, our founders, Rob and James, along with our brewer, Johnny, decided to take a trip down memory lane and, whilst we love all our beers equally without fear or favour, we thought it would be fun to rank all 17.

And this is the result – the entirely unscientific and subjective Big Drop of the Pops Chart. Feel free to disagree with us or salute our words of wisdom. As you wish….

But here we go…

Something has to come last. Although this is probably only by virtue of the fact that none of us are particular fans of hazelnut. Other people tell us it’s delicious!

One of our World Collaboration Series #1 beers, this one was tricky to balance. Adding flavourings, particularly something as controversial as hibiscus, to a beer is always going to be difficult.

We’re not going to lie. It is hard to make good alcohol-free lager. There is nowhere to hide. Alcoholic lager is clean, crisp and dry. There is a reason that lager constitutes about 60% of global beer sales – it’s a pretty unchallenging drink. But its unchallenging nature means when you don’t have the alcohol to boost the overall beer, it is very difficult compensate. Plenty of people like Uptown and its eminently quaffable nature and part of Big Drop’s mission is to provide something for everyone. But for Rob, James and Johnny…it’s just a bit too light.

This was our first collaboration beer and was for Tiny Rebel’s 7th Anniversary pack. It turned us on to the idea that collaboration beers could give us an opportunity to go a bit crazy with styles. This really wound some people up because (they said) you can’t have an alcohol-free imperial stout. Rob, being the ex-lawyer he is, looked through the rule book and couldn’t find anything that said that. So we ignored them.

Another collaboration and another flavoured beer. It split the room on its release. But by the time you get to the end of this list, you’ll realise that none of Rob, James or Johnny are really “down with” fruit-flavoured beers…

Our latest entry into the vegan-friendly Big Drop beers. It’s a good solid golden ale but we didn’t think it had enough stand out character to rank it any higher.

If you ask him (which we recommend you don’t) Johnny will spend hours, possibly days, telling you how difficult it was to perfect a sour beer. It’s got something to do with yeast apparently. But he cracked it in the end. This is a great entry-level sour. Really well balanced. But the competition from here on in starts to get pretty stiff so it still sits outside the top 10.

This is the prodigal son of a spiced beer Johnny developed many years ago (which we didn’t include because you can’t buy it anymore and so we couldn’t taste it). It’s a cracking spiced brown ale and a real favourite of Rob. However, James doesn’t agree with pumpkins on principle. So it gets knocked down a few places.

Rob loves dark beers. However, this one is cherry-flavoured which gives it a fruity tang that means it places a bit lower than it might otherwise. It’s still a banging beer though.

This one is also a cracker. A firm favourite of Rob’s Dad, it was Gold winner at the Global Beer Masters and World’s Best at the World Beer Awards. This was the first beer where we decided to move away from what we had done up to that point, which was focus on the pales and lager (apart from the stout), and try something a bit different. It’s a great beer. Balanced malts and a touch of sweetness make it a great brown ale. Perfect for this time of year.

A great lager! Yep. This was a seasonal special released earlier this year. It took its inspiration from our IPL collaboration (see below). IPL, for those of you at the back not paying attention, stands for India Pale Lager, and basically means a dry-hopped lager. These extra hops add something that “standard” alcohol-free lagers can be missing and took this lager to another level.

This for many was the absolute stand out of the World Collaboration Series #1. It’s a hoppy black beer which gives it a punch over and above the roasted malt notes you expect to get from a black beer. Rob basically exercised CEO privileges and snaffled as many cases of these as he could.

Another collaboration, this was the first time that we all felt we’d nailed a lager. Johnny took some exotic, expensive and rarely available New World hops, meaning that the beer was outstanding flavour wise, but entirely useless from an economic perspective. It took the lighter lager-style beers to another level. 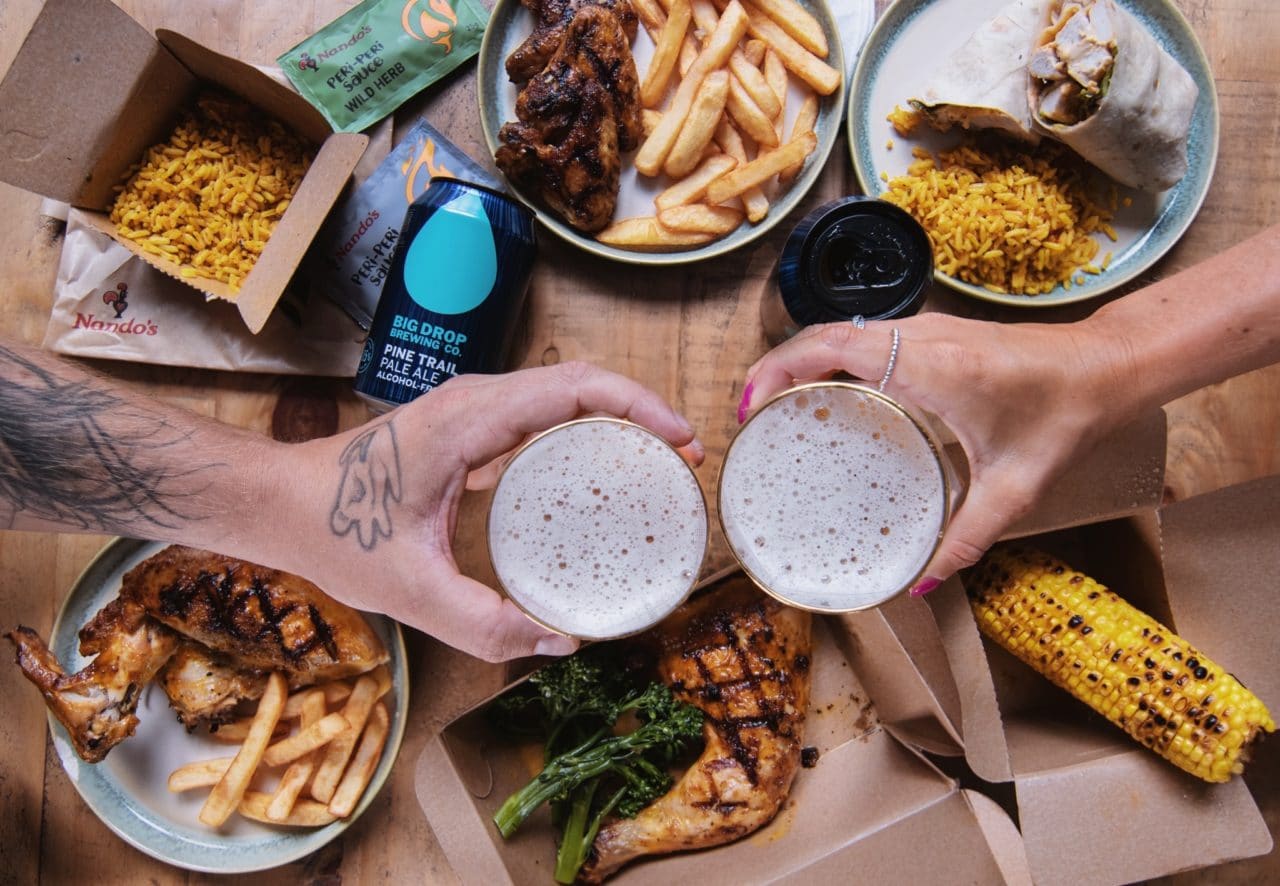 Our flagship beer. Accounting for a big chunk of Big Drop’s volume and available in many countries around the world. This was only the second beer which we ever produced. And it still stands proud amongst its compadres. A giant amongst beers. 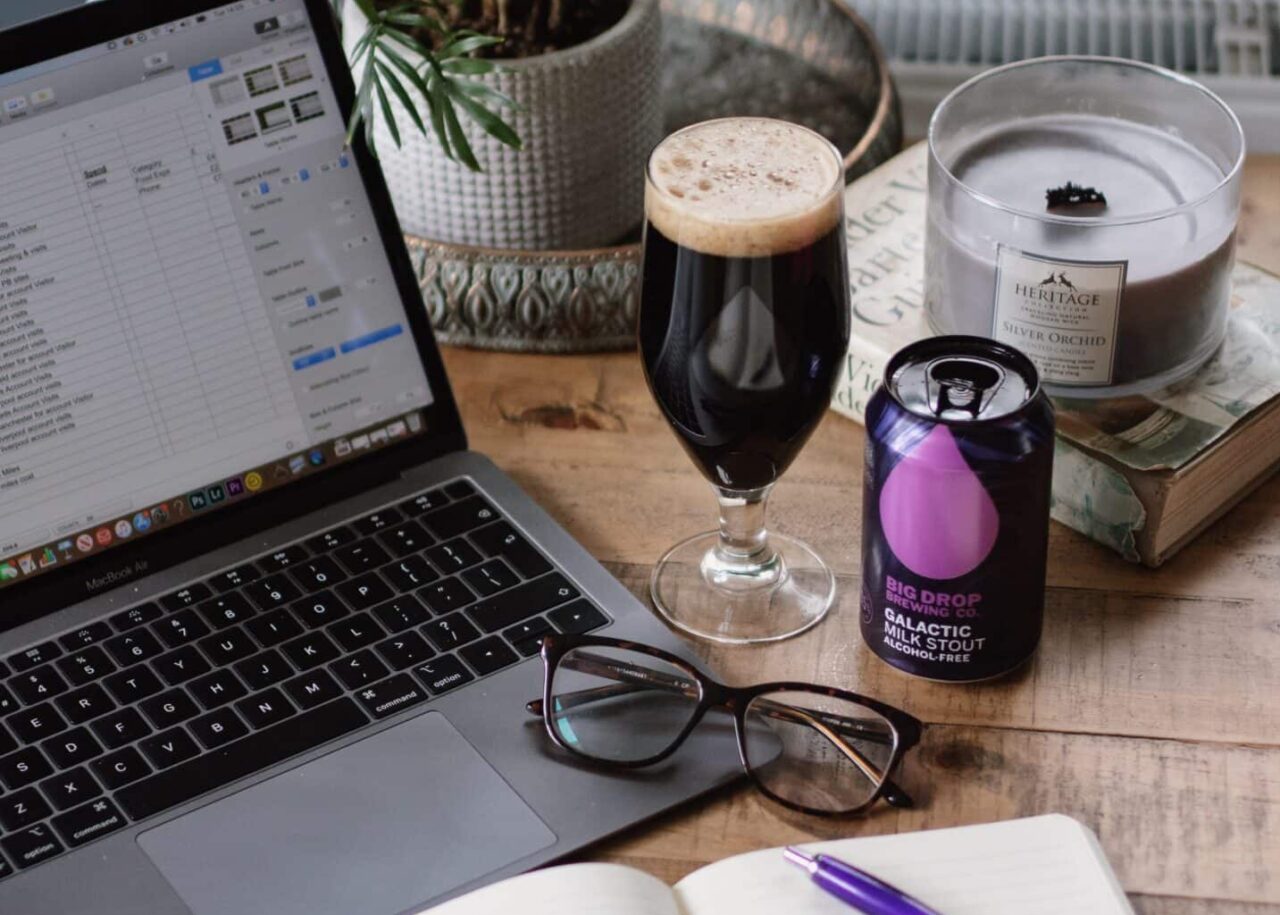 The first (and Rob still thinks the best – but he got outvoted). People often ask us why we brewed an alcohol-free stout before any other (much more popular) style of beer. And the answer has remained the same to this day: because Rob likes stout, and he couldn’t find a decent alcohol-free one. Which just goes to show, sometimes it’s better to solve your own problems before trying to solve anyone else’s.

There’s a lot of guffery about how long it’s taken people to develop their AF beers: endless trips around the world, dozens of breweries visited, hundreds if not thousands of litres poured down the sink. And as we’ve seen, Guinness say it took them four years to develop Guinness 0.0.

To the best of our recollection, it took Johnny about six weeks and a dozen brews to get this beer. The recipe has remained unchanged for four years and it has won more awards than any other AF beer. 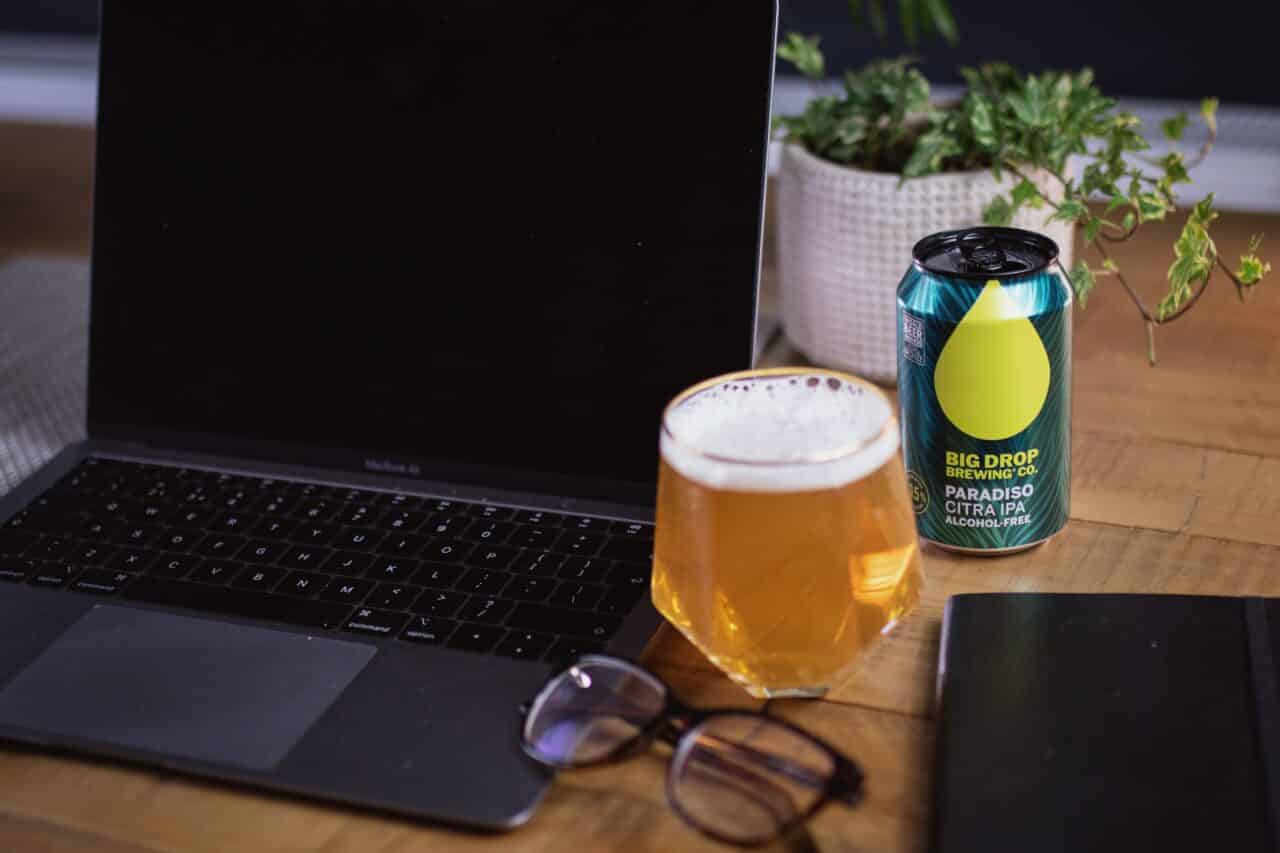 Paradiso took the Pine Trail, gave it a passport, flew it over the Atlantic, hired a Harley and drove Route 66 to the West Coast. Packed with hops it stands as one of the great (we say) AF beers, full stop.

It won Gold in the World Beer Awards in the Speciality IPA category. To be clear: not an AF category but blind tasted against alcoholic beers. Which it beat. And got first place.

So if anyone tells you that AF beer can never be as good as alcoholic beer, point that out to them, invite them to place it in their pipe, smoke it, and tell them they’re wrong. 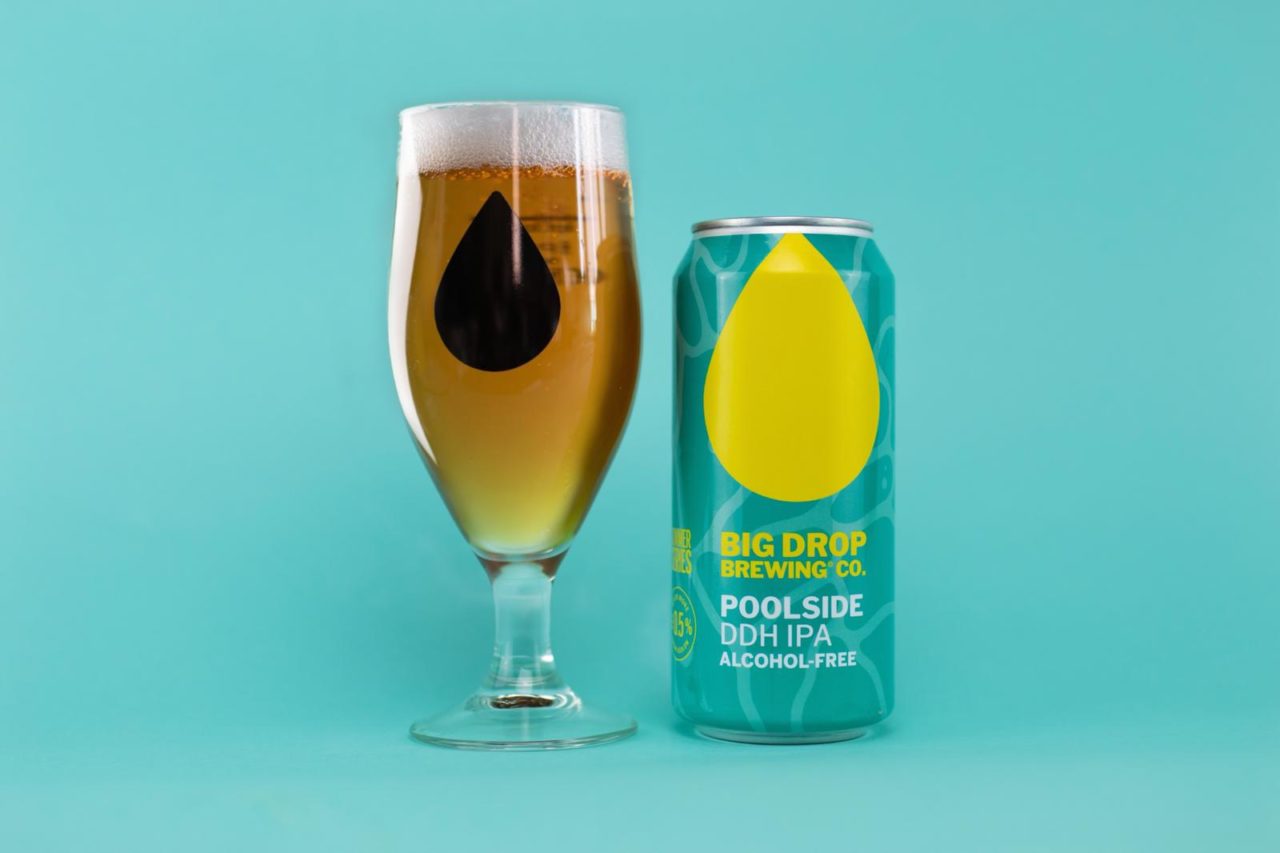 And then we took the Paradiso and doubled down. Literally. DDH – Double Dry Hopped. Take the hops and add some more! Then do it again.

This one is a seasonal special. We couldn’t do it as a standard beer as it would just be too expensive to make (can you spot a trend: Johnny’s good at that…). But blimey, it’s well worth the cost.

Huge pineapple and citrus flavours, a slap of mango and a banger of a thirst quencher.

If you’re nice to us, we might release it again next year…!

So there you have it. What have we learned? Rob likes dark beers, Johnny and James like big hoppy beers, none of us like fruity beers. And the only way to make a great AF lager is to create a prohibitively expensive recipe.

Here’s to the next four years. Ten quid says we’ll be on 30+ banging beers by then. And who knows, Diageo might even have re-worked Kaliber by then. Or maybe not…