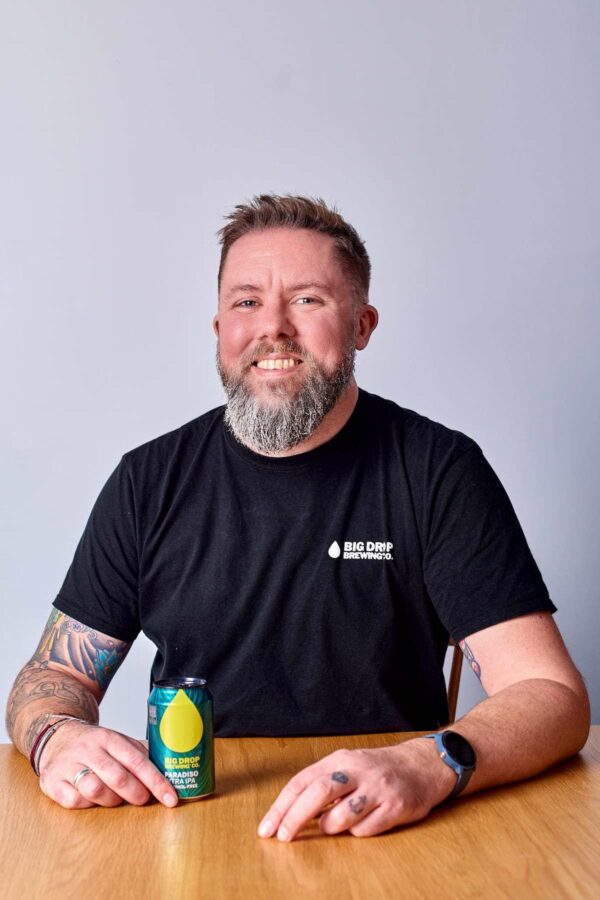 We sat down with one of our co-founders, James Kindred, to get to know one of the two men behind the beer.

1. Which Big Drop is your favourite?

My regular go to Big Drop has to be the Paradiso. When I was still drinking full-strength beer, I’d enjoy the hoppier, fruitier pale ales and the Paradiso fits the bill perfectly, with the added benefit of no booze!]

2. What is your favourite album?

Mastodon’s Crack the Skye is up there. It’s insanely heavy (and the concept behind it is mind-bending: astral planes, Rasputin and more). If I’m looking for something a bit more laid back, Ben Howard’s debut album will be one of the first I’ll reach for.

3. If you were stranded on a desert island, what one thing would you want to have with you?

An acoustic guitar. I’m a bit of a fidget and darting around between things, but if I need to relax I’ll grab my guitar and play a few songs (or just noodle around a bit)

4. When you were younger, what did you want to be when you grew up?

I had no idea! I always enjoyed art and drawing when I was younger and I think influenced most of my career as a graphic designer, but I didn’t decide I wanted to do that until I was in my early 20s.

5. What’s the best thing about owning a beer company?

The variety of challenges! Having been a graphic designer for over 20 years, I’ve never really worked on the entire cross-section of what’s required for a single brand and there’s a lot to cover for a beer brand – especially with the UK, Europe, Australia and the USA to keep in mind!

6. Where is your favourite holiday destination?

My wife and I honeymooned in Canada back in 2008, we absolutely fell in love with the country. It’s an amazing place (we spent two and a half weeks driving from Calgary to Vancouver) and we really want to take the kids with us next time we go.

7. What is your favourite film?

That’s a hard one to pick. I’m a big film fan and enjoy a real range of stuff. The Big Lebowski would definitely be a contender, as would any of the Coen Brothers’ earlier stuff. I’m a fan of Christopher Nolan’s work as well, so I’d chuck Interstellar into the mix.

8. What 3 bits of advice would you give your younger self?

Relax, trust your gut, get some sleep.

10. If you could drink a Big Drop with anyone, dead, alive or fictional, who would it be?

It’d have to be Dimebag Darrell from Pantera, the guy was a serious party animal but also seemed like a straight up, genuine, friendly guy. I’m not sure how Big Drop would have fit into his daily routine, but I’d raise a couple of glasses of Black Tooth Grin with him for sure.

11. If you had a racehorse what would you call it?

12. What is your favourite quote?

A smooth sea never made a skillful sailor.

13. What is your proudest achievement?

Well, starting Big Drop would be one (I have to say that, right?), but I think I’m most proud of my two daughters, who are growing up to be incredible people.

You never want to hear me sing. I’m pretty sure ships have been wrecked because of better sounds. I can yell in key, that’s about as far as my singing skills go.

15. If you could only eat one meal for the rest of your life what would it be?

If my waistline were no issue, a roast dinner would have to be it. Alternatively, I’d have to go with a Singapore Noodles or a Pad Thai.

16. What is the best present you have ever received?

Just before he passed away last year, my Father-in-law gave me his Fender acoustic guitar. It’s a lovely guitar, its sentimental value is priceless.

17. If you were Prime Minister for a day, what’s one law you would make?

My first proper job was as a lifeguard. I used to work at the local outdoor pool in the summer and then train new lifeguards in the autumn and winter. It was terrible pay, but it was a lot of fun (unless a rescue was required!)

19. If time machines were real, what year/era would you go to?

Any time after penicillin and before social media would be nice to visit.

20. Would you rather watch the sunrise or sunset?

Sunrise, I live on the east coast of the UK and the sunrises over the sea are amazing.

21. What book are you reading right now/what is your favourite book?

I’ve just finished reading Dave Grohl’s autobiography, which is great. I’m about to start a biography on Steve McQueen. My favourite book is called Hellraisers and is about The Life and Inebriated Times of Richard Burton, Richard Harris, Peter O’Toole, and Oliver Reed.