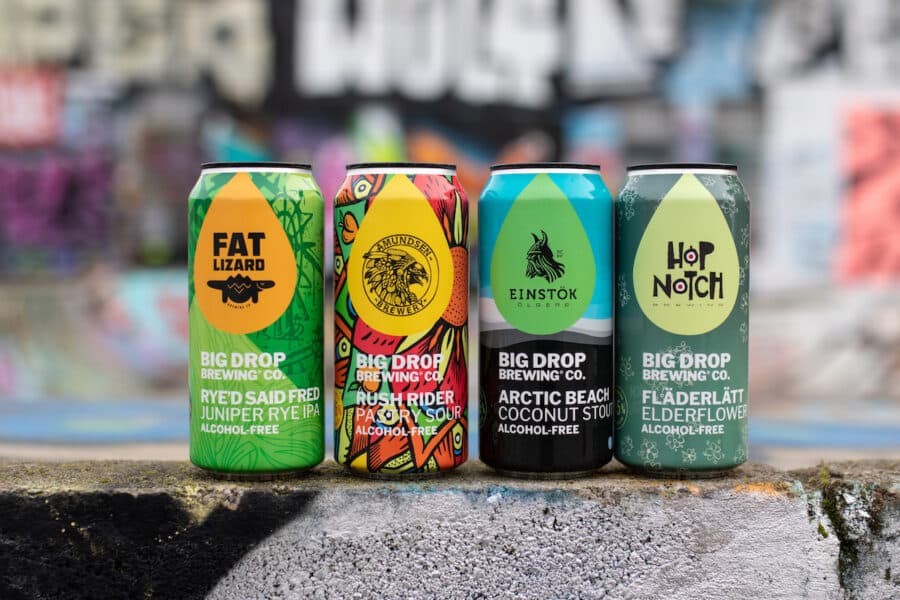 The range is the second in Big Drop’s ‘World Collab Series’, curated with renowned beer expert, Melissa Cole, and a showcase for demonstrating the heights that alcohol-free craft beer has reached. Big Drop is dedicated to pushing the boundaries of alcohol-free beers and its World Collab Series does this by only inviting leading breweries with a reputation for experimentation to participate. The resulting beers often make eyes widen, pique curiosity and bring a smile but, most importantly, they demonstrate to new communities of craft beers fans what’s possible with alcohol-free.

Available from today (18th January), the four beers include: a Coconut Stout, an Elderflower IPA, a Juniper Rye IPA and – last but not least – a vegan-friendly Peach Melba Pastry Sour.

A full-bodied, velvety treat. A blend of the creamy richness of dark chocolate, alongside the goodness of fresh lightly toasted coconut. A burst of roasted malts and subtle coconut flavour will transport your palate to a beachy paradise, whilst you’re snuggled on the sofa.

Refreshment delivered. This well-rounded Elderflower IPA delivers on both the nose and palate. Use of an experimental UK hop ‘Mozart’ generates a unique flavour profile with hints of bitter grapefruit, clean citrus, drawn together by a fresh, fruity elderflower twist.

A complex blend of flavours, most notably spiciness from the rye heavy mash. Subtle nutty herbal tones, intertwining with assertive, forward botanical notes of juniper. A rich toasty goodness, followed up with a fresh aromatic flourish and a bitter finish.

An elegant bouquet of vibrant deep raspberry candy with a sour twist. A delicate nose moves to deliver a gentle refreshing sharp bite, before exploding with an intense profile of fresh vanilla, fresh berries and peach pie. A naughty-treat in a can.

Rob Fink, founder and CEO of Big Drop, commented: “These are all world-class breweries with whom we’ve had great fun conjuring-up big-flavoured beers and brewing them naturally without the need for any artificial nonsense to remove the alcohol. The result isn’t just excellent tasting alcohol-free beer… it’s excellent beer that just happens to be alcohol-free. We’re all about innovation and hope that these special editions will bring the joy of new experiences to people who love great beer.”

Melissa Cole added: “It’s always great to reach out to people all over the world to work together, you always learn things and it’s about expanding old relationships and building new ones, which is the best part about this industry, and to work with respected breweries like the partners on this project is a real privilege.”

Photo by Sergi Ferrete on Unsplash

Its Citra IPA was crowned ‘King of Craft’ at the 2019 Casual Dining show, which was dominated by full-strength beers. It also won the overall Champion’s trophy for ‘Non and Low Alcohol Beer’ at The International Brewing and Cider Awards and a Silver medal at the US Open Beer Championship.

Big Drop was also one of three ‘Best Drinks Producers’ in the 2018 BBC Food & Farming Awards.

“Big Drop specialises in alcohol-free beer and it’s all good. I tried the pale ale and the lager, too, and both are excellent, but the stout really is the business.” — Adrian Chiles, The Guardian

“The most impressive no/low alcohol beer I have ever tried; no argument, it just is.” — Melissa Cole, British Guild of Beer Writers

“In my view, by far the best of the low-alcohol brigade is Big Drop Brewing Co. All its beers come in at just 0.5%, and all of them are excellent – the stout in particular is a jaw-dropper. Superb flavour without compromise.” — Olly Smith, Mail on Sunday

Both had recently become fathers and were looking to cut back on the booze but could not find any decent alternatives to their favourite craft beers.

Along with experimental brewer, Johnny Clayton, they perfected techniques to make a range of 0.5% abv beer styles – but crucially without the need for alcohol extraction – resulting in a fuller-flavour.

Big Drop contract brews in batches through a network of brewing partners worldwide, meaning it can produce fresh beer – locally and ethically – with a minimal carbon footprint.

Recognised as the market leader in the rapidly growing AF craft beer sector, Big Drop can now be found in over 10,000 locations – including throughout Europe, Australia, Canada and – soon to be – the US. In the UK, Big Drop has listings with major pub groups (eg Mitchells & Butlers), restaurant chains (eg Nando’s) and retailers (eg Sainsbury’s, Waitrose, Morrisons and Ocado) as well as on the High Street with Holland & Barrett and on doorsteps with Milk & More.

Its range of beers, which are all <0.5% abv, currently consists of: Stout, Lager, Pale Ale, Citra IPA, Brown Ale, Golden Ale, Hazelnut Porter and a Sour as well as special editions and collaborations with other leading brewers.